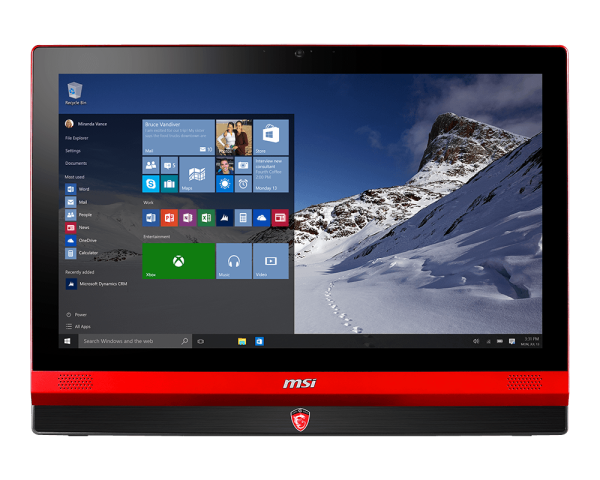 The game is on with All-in-One!

Based on the success of MSI's powerful gaming motherboards and graphics cards, MSI has successfully integrated all parts of a full-worthy and top performing gaming desktop into a large size non-glare display, thereby creating the worlds first All-in-One PC for gaming enthusiasts. Covered by a top-notch audio solution and flanked by a highly responsive touch-screen interface, this gaming All-in-One PC will impress both casual and enthusiastic gamers with visual awe and a striking performance.

Gaming is for everyone!

All around the world, gaming is done in various ways by various people. That's the reason why MSI Gaming All-in-One PC's are designed to fit the needs of various types of gamers. Whether you are young or old, play casual or hardcore, compute after school or in the night or use your PC for more than just gaming, the MSI Gaming All-in-One PC is your companion.

Powerful hardware needs a matching monitor to show it all off. That's why MSI's Gaming All-in-One PCs are featured with a large frameless anti-glare display, capable of playing Full HD images and videos without the hassle of light reflections preventing you from seeing what's happening on your screen.

As more and more PC games available on app-stores and game shops are supporting movement gestures via touch, the MSI Gaming All-in-One PCs come with a multi-touch interface, even supporting 10-finger touch control.

According to medical research, the average flickering rate of conventional monitors is 200 times/sec. This means that your eyes will suffer from over 5 million flicker times in a standard 8 hour working day, which can result in computer vision syndrome.

The Anti-Flicker technology integrated into the GAMING all-in-one display stabilizes the power current and prevents flickering invisible to the naked eye under normal conditions. When used for extended periods of time, it effectively reduces eyestrain while also improving productivity.

Blue light is light with wavelengths in the 381nm to 500nm range. This can be dangerous to the human eye, causing cataract and retinal degeneration. The Anti-Flicker display of the MSI Gaming All-in-One PC effectively reduces blue light.

The MSI GAMING All-in-One PC is equipped with the latest NVIDIA® GeForce® GTX860M, 870M or 880M graphics cards, some of the fastest, most advanced graphics cards at this moment.

The latest 4th generation Intel® Core™ processors have 10% better performance compared to the previous generation and are using a 22nm processor technology. Also DirectX 11 graphics, built-in USB 3.0 and faster media conversion are supported. Next to this all, these processors are very energy efficient.

With MSI Super RAID 2 you can combine up to 3 SSD drives into blazing fast bootable drives. Super RAID 2 design gives the storage performance up to 1500MB/s reading performance on MSI Gaming All-in-One PC, the reading, writing and saving speeds is 15x faster than a single 750GB 7200rpm HDD.Load your operating system, videos or even games faster than ever. You can now enjoy the benefits of bigger and faster storage, without all the trouble that normally surround RAID configurations.

The MSI Gaming All-in-One PC supports Plextor True Speed technology which resolves common SSD issues, including bogging down as a result of long-term use or nearly filled storage space, allowing extreme gamers to enjoy the exhilarating speeds of gaming with SSDs.

A Hi-c CAP is a very small, but super-efficient capacitor. Besides ensuring enough spacing around a CPU socket to install large coolers, it also allows for 93% energy efficiency. Thanks to Hi-c CAP's MSI mainboards are the most energy efficient in the market.

Super Ferrite Chokes use a Ferrite core that is Super-Permeable. This allows the Super Ferrite Chokes to run at a 35 degree Celsius lower temperature, have a 30% higher current capacity, a 20% improvement in power efficiency and better overclocking power stability.

With their aluminum core design, Dark CAP's have been a staple in high-end design mainboard designs and provides lower Equivalent Series Resistance (ESR) as well as its over-10-year lifespan.

The Killer™ E2200 Intelligent Networking Platform is built for maximum networking performance for online games and high-quality streaming media. Featuring Advanced Stream Detect™, Killer E2200 automatically detects and accelerates game traffic ahead of other network traffic for smoother, stutter-free in-game performance and the competitive edge. With this exclusive, automatic traffic prioritization, games and real-time chat get priority over low-level system chatter, giving you the lowest latency for game data on the most controllable network hardware available.

When a gamer plugs in a headphone to the All-in-One PC, the internal speaker's sound output is normally disabled.

With MSI Headset Master you can take control and easily switch between front speakers audio output and headphone audio output at any time.

The speakers can be enabled independently and there is no need to unplug the headset.

Want to show off your skills
or just make a fun GAMING video for your friends?

It's simple, easy to use and ideal for sharing your gameplay with friends, family or the world - Or for capturing those perfect gaming moments, just for the heck of it.

So what are you waiting for? Join the revolution and start streaming and recording with XSplit Gamecaster today.

Use XSplit Gamecaster to stream all of your gaming activities

Add a webcam and show your game face

With MSI's Instant Display Technology, you can easily connect external devices such as a DVD/Blu-Ray player or game console to the All-in-One PC. The monitor will be turned on automatically when starting up a device connected to the HDMI-in port, turning the MSI All-in-One PC in a multi-platform engine for watching Full HD movies or playing console games on its large screen.

Shut down and game on! With MSI Super Charger you can simply deliver MORE power to your smartphone, tablet, USB game controller or portable console. This allows you to quickly charge these devices for use when you're not gaming on your PC, eliminating the need for wall power sockets.

The USB 3.0 port supports transfer rates up to 5 Gbps, ten times faster then USB 2.0. This means that you can transfer high-definition data including movies, videos, and other large file formats – faster and easier than before.

The MSI All-in-One PCs are packed with ports to connect your headset, keyboard, mouse, printer and other premium devices to.

The four VESA wall mount holes on the back of the MSI All-in-One PC offer you the chance to install the system on a wall, adding that extra 'slickness' to your room!